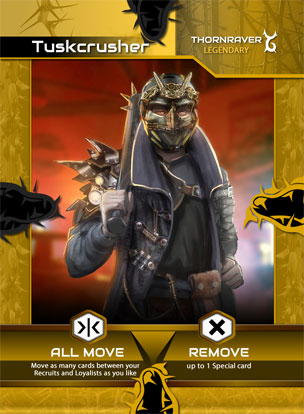 The Norseman of Waterborne have been raising Mammoths (cloned in the late 2080s) and utilizing them as both beasts of labor and attack animals. However, only a small number are allowed to live within the confines of Novus. The others were released into the wild, eventually ending up in the high valleys between the Greylands and West Emberlands. As the population grew, Randock von Westin took issue with these animals destoying his lands thus hunting them and taking their tusks as trophies. Randock was a retired spy and a brutal fighter who was angry at the world. He believed that someone had to make Solus great again and when the Overlord heard of his exploits, he was invited to join the cause. As a loyal follower who can’t think for himself, Tuskcrusher (as he would be named) was led blindly towards whatever goal the Overlord wanted to achieve.