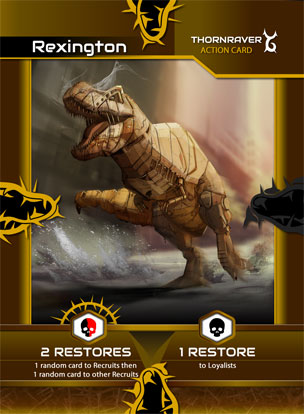 Rexis Parago was an inventor who originally grew up in the New Republic. However, his inventions were sometimes dangerous and eventually led to being forced out of the city. Rexis travelled west until he found an abandoned underground facility in a very inhospital region known as the Smoldering Golum, which very few people are able to survive in. In order to do so, his first and most profound invention was a mechanical dinasaur which he called Rexington for egotistical reasons. They became inseperable and successfully navigated the damaged land around them until joining the Thornravers.